Congregational Stories: When we Hold Hands Together, Magic Can Happen 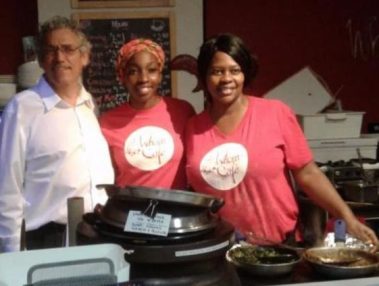 In October 2017, after nearly two years of study, prayer and planning, the Union Church in Waban, Massachusetts, officially became a 1K Church when they extended a $2,500 loan at 1% interest to Sandra Okiror-Njoroge, who is the owner of Wham’s Café in nearby Lowell. This small business is closely aligned with the congregation’s concerns with food insecurity, homelessness and children.

Born and raised in urban Kenya, Sandra Okiror-Njoroge emigrated to Toronto to attend university where she studied entrepreneurship. Today she operates Wham’s Café with the help of her older daughter, Wambui. They serve Kenyan foods while also building community with their customers. Sandra describes the Café as serving “excellent Kenyan coffee, delicious Kenyan food and cool Kenyan vibes.” The food is inexpensive but healthy, a combination she hopes appeals to nearby college students as much as it does to the neighborhood locals. The loan from Union Church allows her to expand to offer meals her customers can take home for their families.

The café feels as much like a community center as it does a restaurant. The pleasant banter Sandra and Wambui exchange with their customers over the counter sounds like the friendly chatter among friends on a village corner. Families are welcome at Wham’s. A corner of the café is set aside as a play area, with games and toys provided.

When Sandra’s loan repayments began in January, she was invited to visit the Union Church to celebrate. Sandra brought her mother Charity and her daughters Wambui and Stella to meet the congregation. She participated in a dramatic reading of the scripture and helped serve communion during the church service. Following worship, the family stayed to share refreshments and an informal conversation about the Café and their dreams. Sandra and Wambui shared the news that revenues have grown, and their optimism about the future was contagious. As Sandra said, “When we all hold hands together, magic can happen.”

In the coming weeks, small groups of church members will travel together to Lowell to share a meal at Wham’s Café. All look forward to growing in relationship with Sandra, her family, and Wham’s Café. Lay leader Alison McCarty reports: “We are excited to be making another loan. And with Sandra’s repayments we will soon be able to look for our 3rd!”

The Easy Part: committing to the idea

Brita Gill-Austern and Bart Kelso, both ordained ministers and theologians who live in Newton and worship at the Union Church in Waban, led a 10-week bible study in response to the Criterion Institute’s campaign, launched at the Clinton Global Initiative in 2012. The study group explored what “God’s Economy” might look like and were inspired to request funding from the church’s Mission Outreach Committee. A capital campaign had provided funding earmarked for mission work. The Mission Outreach Committee agreed to make $5,000 available for “1K Churches” micro-lending to small businesses. The Committee requested that the funds be loaned to small businesses or non-profit organizations closely aligned to the work of the church, i.e. focusing on addressing food insecurity, homelessness or children.

Once committed to the idea of micro-lending, the original group sought new members and began the process of making its first loan. Some dozen individuals began reaching out to local organizations: was there an opportunity for the Union Church to provide loans of $500 to $5,000 to help a small business? Were there entrepreneurs related to that organization who were having trouble getting access to money? To the group’s surprise, none of the local non-profits and small business associations they reached out to was interested. The timing was wrong or partnering with a church was an unfamiliar idea. With one exception.

Church member Wataru Matsuyasu, an attorney with the Boston firm of Klein, Hornig LLP, had experience in low-incoming housing and community development. He introduced the group to Frank Carvalho, Executive Director of Mill Cities Community Investment. His response was immediate and warmly positive. Over the ensuing year, Frank taught the church group about bodega owners and entrepreneurs in Lawrence and Lowell, Massachusetts: the struggles they face and the opportunities they have to expand. Still, it seemed that nobody needed what the congregation had to offer. One after the other, entrepreneurs identified as possible borrowers opted out or found funding elsewhere.

Over a casual conversation at a local restaurant counter several months later, Carvalho learned that the restaurant owner wanted to expand her offering of inexpensive, healthy food so that neighbors could carry out ready-made meals. Having developed her business by handing out catering flyers at local churches, Sandra Okiror-Njoroge, owner of Wham’s Café, found the idea of working with a church appealing. She submitted a loan application, and the group of volunteers from the Union Church in Waban were intrigued.

Born and raised in urban Kenya, Sandra emigrated to Toronto to attend university where she studied entrepreneurship. The first Wham’s Café was opened in Toronto after the birth of Sandra’s first child, her daughter, Wambui. That Café closed after 3 years as it became increasingly difficult for Sandra to manage the business while raising a toddler. Sandra moved on to a career in high tech. More recently, after her second daughter, Stella, reached school age, Sandra revived Wham’s Café on a corner (with parking!) in Lowell, just across the river from the University of Massachusetts.