This poem was inspired by a wonderful quote used by both Martin Luther King Jr., and President Barack Obama in their speeches:  “the arc of the moral universe — of history — is long but it bends toward justice…”

I’ve titled my poem “We are Alice.”

My poem also hearkens to the 1871 novel by Lewis Carol, titled ‘Through the Looking Glass, and What Alice Found There.”  In this book, Alice enters a fantastical world by climbing through a mirror into a world that she can see beyond it.

– By Luisamaria Ruiz Carlile, April 7, 2016 [Shared with Criterion at our recent Summit on the State of the Field of Gender Lens Investing on April 8th, 2016] 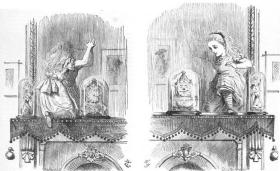 We are Alice, lensing thru the looking glass.

Spotlight on the hidden influencers,

Seeing wealth beneath the bias,

Abundance in the last and least.

Smashing past the silos,

Until a new math emerges.

Assigning  value beyond the counting,

Alice lensing through the looking glass,

Gender bending the arc of her story so that it tilts toward justice.